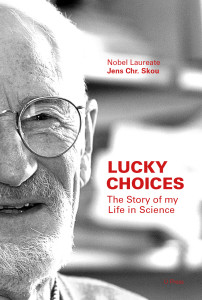 Review by Jack H. Kaplan in The Physiologist:

“Jens Christian Skou emerges as a humanitarian scientist and physician who has been a truly influential presence in physiology and biophysics. He has been driven by curiosity and the desire to do good. As someone who is familiar with this field and some of the scientists who have played a role in the story, I highly recommend Jens Christian Skou’s Lucky Choices for experts, students, or anyone who loves science.”

It has been said that ‘the discovery of the Na, K-ATPase by J. C. Skou in 1957 must rank as one of the most influential contribu­tions to Bioenergetics and Cell Physiology.’ The ion-transporting enzyme has since been acknowledged as a vital ‘pump’ in all cells.

Skou’s memoirs tell the story of a Nobel Prize-winning breakthrough in biochemis­try. But during his voyage of discovery he also repeatedly finds occasion to speak out in defence of the basic principles of scientific research. ‘We would,’ as Skou says in one of his speeches, ‘do well to promote science by encouraging young people to engage with their profoundly human capacity for astonish­ment, and wonder.’

The ion-transporting pump continues to sur­prise. Its involvement in genetic disease is the latest addition to our understanding of this fascinating mechanism, and there will likely be much more to learn in the future.